The Department of English and Comparative Literature
Will Glovinsky 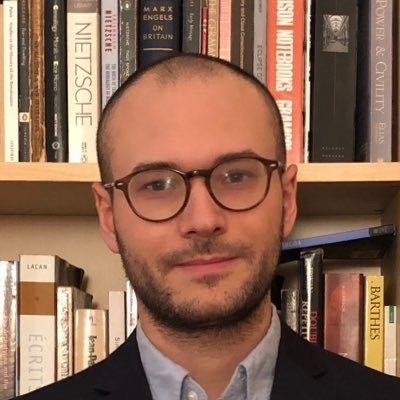 Will Glovinsky is a PhD candidate in English and Comparative Literature, specializing in nineteenth-century British literature. His dissertation, “Unfeeling Empire: The Realist Novel in Imperial Britain,” examines the role of emotional management in British imperial culture and in the development of realist aesthetics. It argues that the Victorian stoicism behind such well known phrases as ‘keep a stiff upper lip’ or ‘keep calm and carry on’ was not only a cultural ethos, but also a key impulse shaping the forms and themes of realist novels. Reading works by Jane Austen, William Makepeace Thackeray, George Eliot, and Joseph Conrad, the project re-examines several aspects of literary realism, such as the affective deflations of omniscient narrators, the rejection of melodramatic models of villainy, and the rise of unheroic protagonists in early twentieth-century colonial novels.

Will’s articles, essays, and reviews have appeared or are forthcoming in ELH, Victorian Literature and Culture, V21collective.org, Los Angeles Review of Books, Public Books, The Rumpus, The Millions, and elsewhere. At Columbia, he has taught ENGL 1010 University Writing and led a seminar in ENGL 3001 Literary Texts, Critical Methods. He currently co-convenes the Nineteenth-Century British Colloquium. Will received his BA in Comparative Literature from Swarthmore College in 2012 and his MA & MPhil from Columbia (2015, 2017).