The Department of English and Comparative Literature
Eileen Gillooly 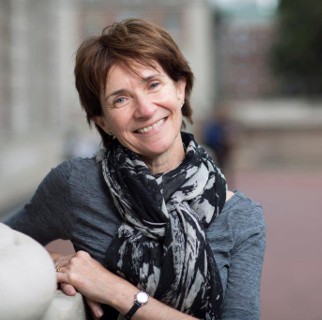 Eileen Gillooly
Executive Director, Heyman Center for the Humanities and Society of Fellows; Adjunct Associate Professor of English and Comparative Literature and the Institute for Research on Women and Gender

B.A., Scripps College (1977); Ph.D., Columbia (1993). Professor Gillooly's interests include nineteenth-century literature and culture in Britain and its colonies, gender studies, public humanities, justice studies, medical and health humanities, the history of the English novel, and literary and social theory. She is the author of Smile of Discontent: Humor, Gender, and Nineteenth-Century British Fiction(University of Chicago Press, 1999), which was awarded the Perkins Prize by the International Society for the Study of Narrative (2001), and of essays, articles, and reviews in such publications as Victorian Studies, ELH, Feminist Studies, The New York Times Book Review, Victorian Literary Cultures: A Critical Companion to the Nineteenth-Century Novel, Feminist Literary Theory: A Dictionary, The Victorian Comic Spirit, The Politics of Humour, Victorian Prism: Refractions of the Crystal Palace, Feminist Nightmares/Women at Odds, Contemporary Dickens, and A Companion to British Literature (Wiley/Blackwell). She has edited the poetry of Robert Browning and Rudyard Kipling (Sterling Publishing: 2000 and 2001) and is a contributing editor of Victorian Prism: Refractions of the Crystal Palace (University of Virginia Press, 2007), with James Buzard and Joseph Childers, and Contemporary Dickens (Ohio State University Press, 2009; paperback, 2015), with Deirdre David. She has been awarded research fellowships by the American Council of Learned Societies, the National Endowment for the Humanities, the National Humanities Center, the Woodrow Wilson Foundation, the Whiting Foundation, St. Deiniol’s Library (UK), and the Moore Institute at the National University of Ireland, Galway. She is currently a principal investigator on the Andrew W. Mellon Foundation grant for Justice-in-Education (2015-2018). In 2002, she received the Award for Distinguished Service to the Core Curriculum. She has served on the Executive Board of the International Society for the Study of Narrative (2005-2008) and the Executive Committee of the MLA Division for the Victorian Period (2009-2014). She is on the advisory boards of Nineteenth-Century Gender Studies and Columbia Themes in Philosophy, Social Criticism and the Arts, Columbia University Press. Her current projects include a book about parental feeling in nineteenth-century middle-class Britain and a digital, open-access critical edition of David Copperfield.