The Department of English and Comparative Literature
Farah Jasmine Griffin 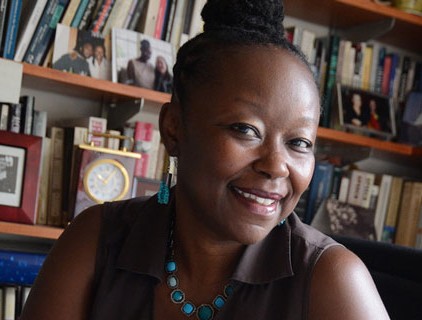 Farah Jasmine Griffin is the William B. Ransford Professor of English and Comparative Literature and African American Studies at Columbia University, where she also served as the inaugural Chair of the African American and African Diaspora Studies. Professor Griffin received her B.A. in History & Literature from Harvard and her Ph.D. in American Studies from Yale. She is the author or editor of eight books including Who Set You Flowin?: The African American Migration Narrative (Oxford, 1995), If You Can’t Be Free, Be a Mystery: In Search of Billie Holiday (Free Press, 2001), and Harlem Nocturne: Women Artists and Progressive Politics During World War II (Basic Books, 2013).

Griffin collaborated with composer, pianist, Geri Allen and director, actor S. Epatha Merkerson on two theatrical projects, for which she wrote the book: The first, “Geri Allen and Friends Celebrate the Great Jazz Women of the Apollo,” with Lizz Wright, Dianne Reeves, Teri Lyne Carrington and others, premiered on the main stage of the Apollo Theater in May of 2013. The second, “A  Conversation with Mary Lou” featuring vocalist Carmen Lundy, premiered at Harlem Stage in March 2014 and was performed at The John F. Kennedy Center in May of 2016. Her most recent book, Read Until You Understand: The Profound Wisdom of Black Life and Literature was published by W.W. Norton in September 2021. Griffin is a 2021-22 Guggenheim Fellow and Mellon Foundation Fellow in Residence.

Who Set You Flowin?: The African American Migration Narrative

If You Can’t Be Free, Be a Mystery: In Search of Billie Holiday

Farah Jasmine Griffin
Back to Top